​If I’m being honest,  Northern Ireland was what the area I was most excited about on our Irish roadtrip. The fact that the history and tension related to the Troubles was so recent that most people had first hand experience with it was something I don’t think we often get the opportunity to see while traveling. I had also fallen in love with the pictures I had seen of the Antrim Coast and couldn’t wait to make the drive from Belfast north along the Causeway Coastal Route. We were not disappointed in the least. If you have a few days to spare during your trip to Ireland, I highly recommend taking a trip north! 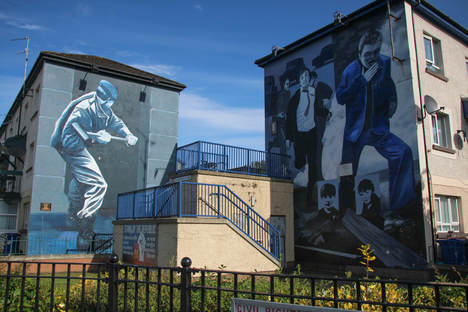 Getting There
You have the option of planes, trains (direct from Dublin) and automobiles. There are no formal land crossings so you won’t even know you’ve entered the UK. We flew in to George Best City Center Airport on a direct flight from Reykjavik. We only learned once we landed that Belfast has two airports! If you’re renting a car or arranging a pick up, make sure you are smarter than us and double check which airport you will be landing in!

Money
While the euro is widely accepted across Northern Ireland the official currency is the pound sterling. If you pay using UK pounds sterling or euros you will receive change in Northern Irish pounds sterling. My understanding is that these bank notes are only accepted in Northern Ireland so make sure you use them wisely! We opted to take some cash out at the airport but to try and use credit card whenever possible to minimize the chance we would get stuck with cash.

Transportation
We rented a car which we picked up from the international airport (Ooops! In hindsight it would have been much more convenient to pick up the car from the airport we were actually flying into).  We found that having a car gave us the flexibility to see Northern Ireland at our own pace but if you aren't comfortable driving there are lots of day trips you can arrange from Belfast to see the Antrim Coast. Some even have themes - like the ever popular Game of Thrones tour! 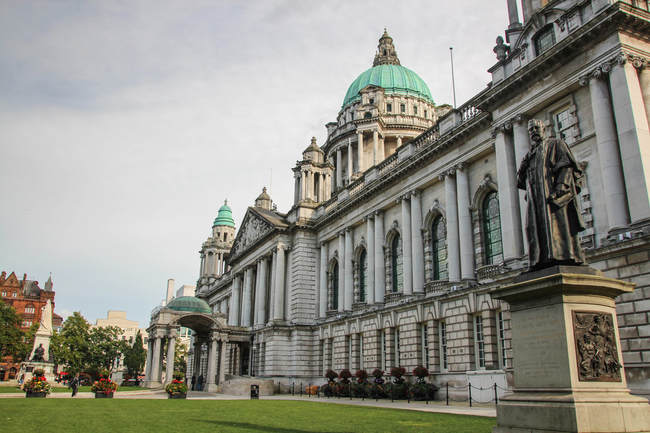 Day 1 - Spend the Day in Belfast

Start your day with a traditional Irish breakfast before heading out to see the city.  Catch the hop on hop off bus tour to get oriented to the city – if the weather is rainy it will also give you a chance to stay dry between stops.  Stop at Belfast City Hall to tour the gardens outside of the beautiful building and take a free tour inside  (Check here for tour times). Stop for lunch in the Queen’s University neighbourhood at one of the many cheap eat spots – we LOVED the spicy and flavourful wraps at Kurrito.

If you want to get a sense of what makes Belfast so unique I would highly recommend booking a Black Cab Tour in the afternoon. The tour operators are typically people who have lived through the tension and violence in Belfast and we learned so much on our 1.5 hour tour of the city. We visited protestant and catholic neighbourhoods like The Falls and Shankhill Road, saw memorials, left a message on the peace wall and got to hear first hand stories of what it was like to grow up in Belfast during the troubles. We were surprised to learn that they still close the gates to the neighbourhoods each evening and seeing chain link fence completely still encapsulating the backyards of some of the townhouses that abut the peace wall, to protect the residents from things being thrown over the walls, made us realize that tension still exists.

Our cab driver was super knowledgeable and easy going and we loved that the tour was private – so we didn’t feel quite so bad when our toddler had a mid tour meltdown.  By booking in advance you can also choose your pick up and drop off location which means if you’ve headed back to your hotel for nap time, they can meet you there and save you a trip.

Have another day in Belfast? We have heard great things about the Titanic Museum, though the price tag of 18 pounds per adult was a little steep for us. The bonus though? Kids under 5 get in for free meaning it could be a great family friendly activity for your preschoolers at a better bargain. 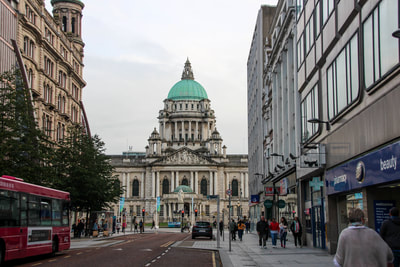 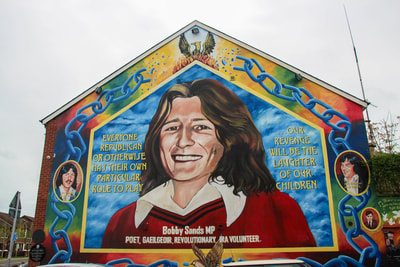 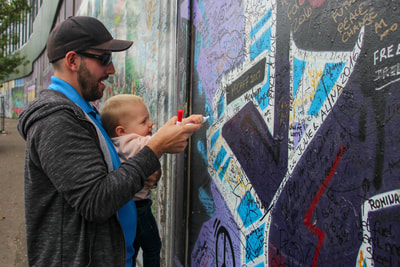 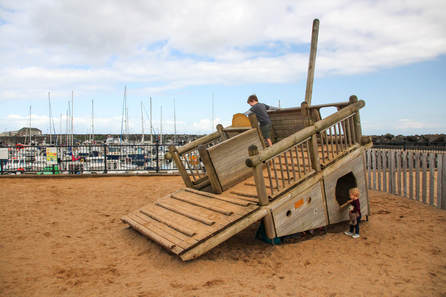 Day 2: Head North
Start early so you can make the most of your day. Drive up the Causeway Coastal Route, stopping along the way in Ballycastle where there’s a great park overlooking the sea and a small coffee shop and grocery store across the street. The trip from Belfast to Carrick-a-rede Rope Bridge took us approximately 2 hours with our stop but was well worth the journey!

Your first stop is Carrick-a-Rede Rope Bridge which was first built by salmon fisherman in the 1700s it spans a gap of about 20 m and soars 30 m above the water. For me, the highlight was not so much the bridge itself but the stunning views along the path that leads for about 20 minutes from the ticket booth to the bridge where you cross to the island of Carrick-a-rede. You can see as far as Scotland on a clear day and the colour of the water rivals anything in the Carribean!

Tip: We didn’t anticipate the longer walk from where the ticket hut is to the rope bridge. Budget at least 60-90 minutes here to fully appreciate it. Note that if your child is not walking independently (that is if you aren’t comfortable letting them walk across the bridge) you have to have your child secured in a carrier to bring them across the rope bridge, you are not allowed to carry them in your arms. 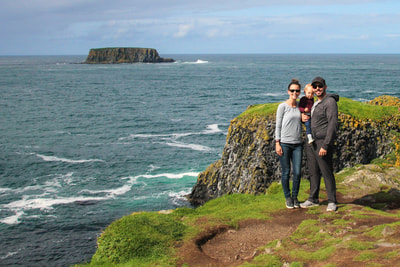 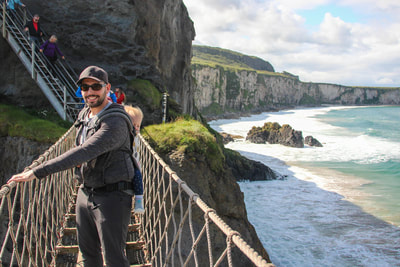 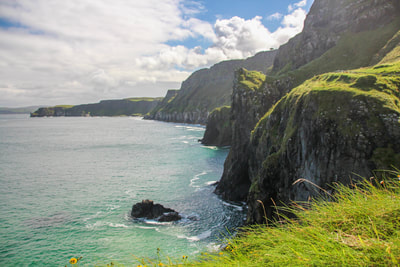 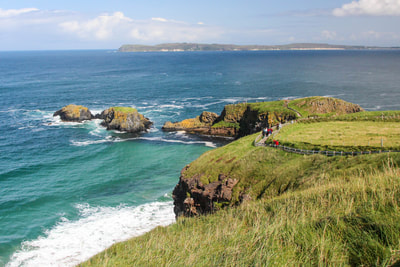 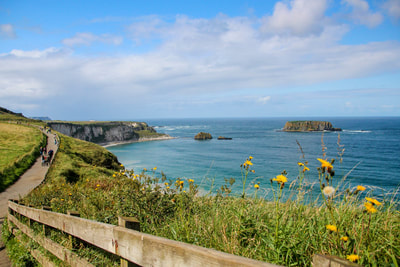 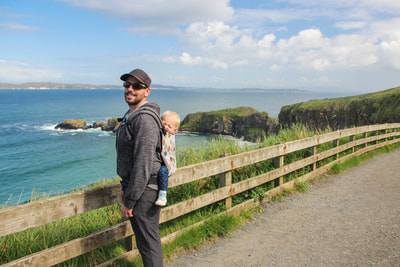 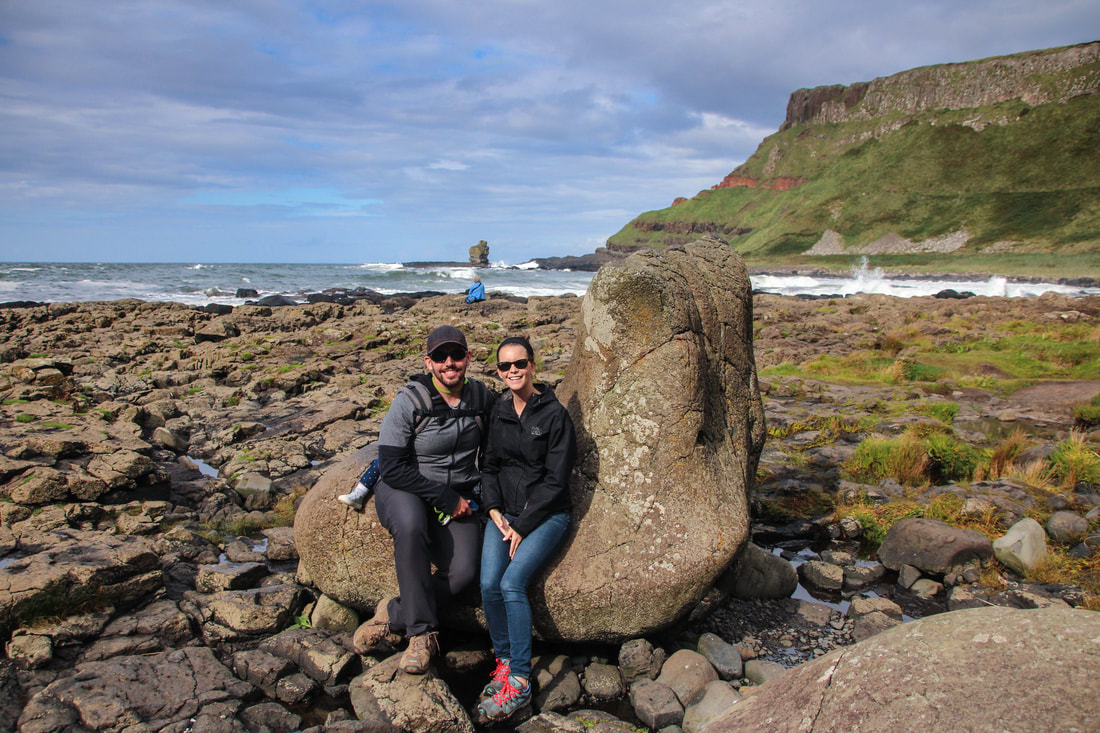 Just 10 minutes down the road from Carrick-a-Rede is probably Northern Ireland’s best known attraction, Giant’s Causeway. Over 40,000 interlocking basalt columns stretch from here all the way to Scotland which according to legend were built by Finn McCool to join the north channel so that he and a Scottish giant could fight. We loved that an audio tour was provided with admission and enjoyed walking around the exploring the grounds. Make sure you walk past where the causeway juts into the ocean to take a seat on Finn McCool’s boot!

Inside the visitor’s centre is a little museum (free with entry) with interactive exhibits, a short film explaining the legends behind how the Causeway came to be and a great and affordable little café where you can stop for lunch with AMAZING looking desserts where you can stop before or after you see the Causeway.


​Tip: If you have little legs, opt to walk down (or use your stroller) from the welcome centre to the causeway either and then catch the bus to bring you back uphill. Your legs, and theirs, will thank you!

We ran out of time but there are two other stops you might want to make if you have the time: Old Bushmill’s Distillery, the oldest whiskey distillery in Ireland, is located just 2 miles from Giant’s Causeway and there’s a steam train that connects the two sites during the summer months.

Tip: If you’re planning on visiting Bushmill’s, know that children under the age of 8 are allowed to visit the site but are not allowed to go on the tour.

The other stop you might want to make is just a couple minutes down the road from Bushmill’s. Dunluce Castle is a mostly ruined castle from the 1600s that sits atop the cliffs along the Antrim Coast. It was thought to be the inspiration for the castle where the kings and queens of Narnia rule in the Chronicles of Narnia.  The entry fee is 5 pounds for adults with children under 4 getting in for free. 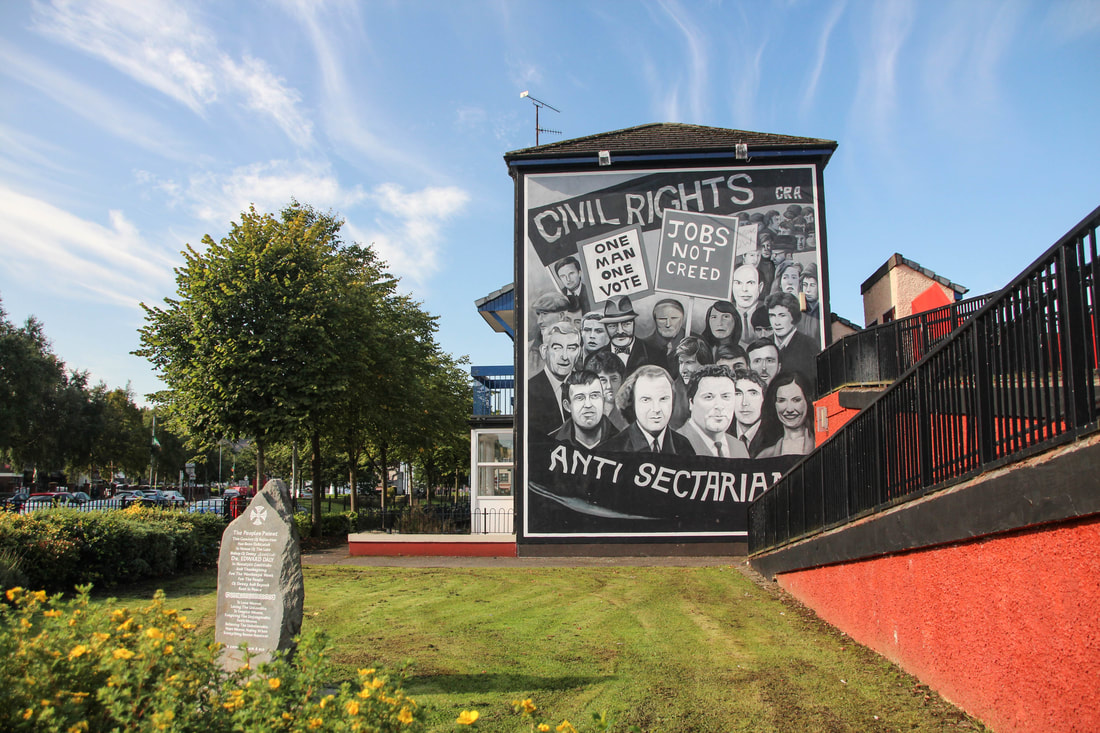 Day 3 - Explore Derry
​We opted to stay just outside of Derry, located 30 minutes from Giant's Causaeway it's the second largest city in Northern Ireland. Start the day with a walking tour of Derry. You can opt to take a tour of the whole city or a shorter and more compact tour of the Bogside neighbourhood where Bloody Sunday took place. We opted for the Bogside tour which was 3 pounds each and left from the Museum of Free Derry.

Stop for a light lunch at the family friendly Sandwich Company before exploring the rest of the city by foot. Make sure you walk part of the intact walls of the city – Derry is referred to as the maiden city because despite multiple sieges on it, the walls were never breached. Our daughter also loved playing in the fountains in the square outside of the Guildhall.
Head across the peace bridge to Ebrington Square and enjoy an amazing dinner and some well earned craft beer at Walled City Brewery.  It is just a quick walk from the city centre and the view of the Peace Bridge and the city skyline from the square is worth it!
​
After dinner, hit the road back to Belfast, it’s just an hour and a half drive from Derry on the main throughway! ​ 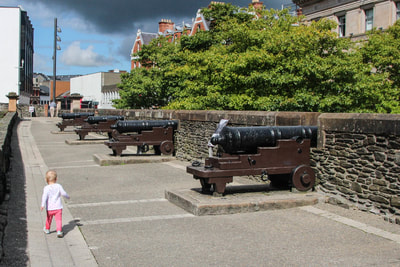 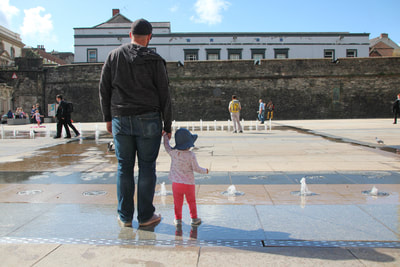 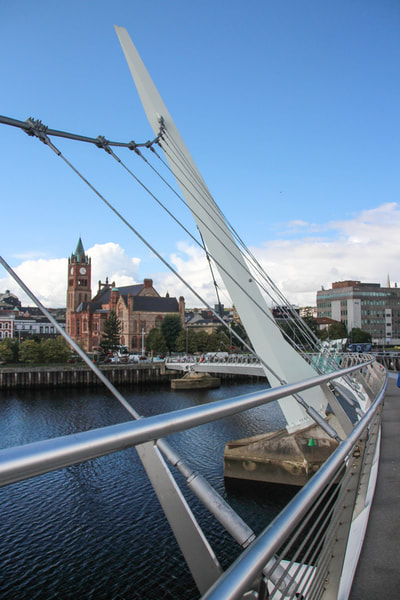